participants at the opening ceremony

Through the help of the Wild Chimpanzee Foundation and the instrumentality of the Forestry Development Authority, a new Ecolodge has been opened in Sinoe County in the buffer zone of the Sapo National Park.

The opening ceremony was held on Saturday 11, December 2021 at the newly opened Sapo Ecolodge in Jalay Town.

The opening that was elaborately celebrated by the Forestry Development Authority (FDA), the Wild Chimpanzee Foundation (WCF), local authorities, communities and partners (Fauna & Flora International and others), aimed at formally presenting the Sapo Ecolodge being prepared to start receiving tourists and to setup an initial co-management structure as a way of paving the way for the larger opening in early 2022 to promote conservation and community-based ecotourism in Liberia. 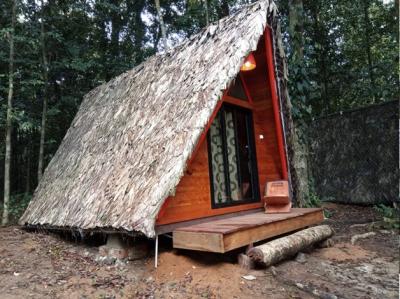 The Sapo Ecolodge is located right over the Sinoe River at the edge of Sapo National Park, an area that gives a magnificent view and makes people to enjoy nature. Sapo National Park is home to the most emblematic wildlife species in Liberia and West Africa, such as the West African chimpanzee, forest elephants and pygmy hippos. Those and any other species are the reason why tourists from all over the world are interested to come to Liberia. This requires the needed infrastructure and trained community members to receive the tourists. WCF received funding from the German Foundation “Rainforest Rescue” for the construction of the Sapo Ecolodge and the training of local community members to help running the Ecolodge and serve as tourists guides. The design and construction of the Sapo Ecolodge were done by Libassa Ecolodge, which has developed a strong partnership with WCF and FDA. The new Sapo Ecolodge consists of 3 self-contained chalets, 2 platforms for tents, a dining area and 2 separate bathrooms.

The keynote speaker on the occasion, FDA Managing Director C. Mike Doryen, lauded the people of Sinoe County on behalf of President George M. Weah for keeping their forest for more than two hundred years that it is about to bring investors to their county and benefits to the citizens and the incoming generations of Sinoe County and Liberia in general.

Mr. Doryen pointed out that as the world expresses high degree of interest in mitigating climate change, Liberia is one country among the list of countries strongly supporting the program in terms of forest conservation in West Africa.

According to Mr. Doryen, maintaining the forest making up the Sapo National Park is one major approach to compliance to the regulation of mitigating Climate Change, and the effort made by WCF to build the Sapo Ecolodge will bring a lot of tourists and investors that will increase revenue to be shared among communities around the park.

The FDA Managing Director praised the Sapo Ecolodge and said it is one of the best in the world to attract tourists and investors.  According to him, the beauty of the Sapo Ecolodge will entice tourists so that they will not leave easily when they come here.

The MD expressed his gratitude to the local Community Ecoguard who also have been supported by WCF, for helping to protect the forest, noting that such is the same the white man does to benefit their citizens from their forest resources.

“Days back only missionaries used to help, but now others are coming to help Liberians due to our sustainable management of resources, most especially our forest,” said Mr. Doryen.

Admonishing citizens of the county, Mr. Doryen told them, especially the youths, to always be kind and avoid violence and lawlessness even if someone comes to incite them to do the wrong thing that will scare tourists and investors.

He urged them to follow the right steps prescribed by the Government of Liberia through the FDA that is the agency for both the government and the people.

Representatives of communities, districts and officials of the county authorities expressed their excitement and welcomed the establishment of the Sapo Ecolodge. They, at the same time, appreciated the WCF and the FDA for helping to create the space for job opportunities for their children in the county and also giving them clean drinking water in their environments, as WCF paid for the construction of two handpump water wells in Jalay Town.

Expressing their gratitude to the WCF and FDA, the community representatives in separate views said since the 1980s till now no development of such has taken place in their county and seeing this beautiful Sapo Ecolodge in the forest is very welcoming. They then pledged their fullest support to work with the WCF through the FDA in Sinoe to protect and maintain the Sapo Ecolodge. The citizens also expressed the hope that more of such a lodge can be built to attract many tourists to visit the Sapo National Park.

The Sapo National Park has over the years been a hot spot for illegal mining and hunting. As the Sapo Ecolodge is dedicated, the citizens are sending out a strong warning to the illegal miners to vacate the area or face other actions including legal actions. The Development Superintendent of Sinoe County, Madam Barbara M. Keah, appreciated the FDA, the WCF and other partners who are involved in managing the Liberian forests sustainably, welcoming the establishment of the Sapo Ecolodge and thanking the FDA management for such a great investment that she claims will bring opportunity and income to the county.

She rhetorically said chimpanzees are their brothers, sisters and relatives, stressing that saving them is saving Sinoe County and Liberia at large.

Prof. Dr. Christophe Boesch, President of the Wild Chimpanzee Foundation (WCF), said he had worked for 42 years in West Africa, beginning in Côte d’Ivoire as a Research Director and university professor. According to him, he saw the pressure on the park which led him to get interested in creating the WCF in 2000. He said he did not just want to be the Director for the chimpanzee researche institute, but to establish this non-governmental organization that will make a great impact in Africa. WCF started in Liberia in 2006 and was also established in Guinea in 2009. Its main focus is to protect African forest to save chimpanzees.

Upon this effort by WCF, the Grebo-Krahn National Park was created in 2017 in Liberia between Grand Gedeh and River Gee counties. A 6,500 km2 park was also created in Guinea with over 5,000 chimpanzees therein.

Prof. Boesch said creating a national park is the first step and it is an opportunity for the communities around the park to be prepared for more job opportunities.  According to him, developing the Sapo Ecolodge brings a visible sign for jobs to the communities and the country as well. During the program, WCF presented 10 community members who have received training and are already involved in the activities of the Sapo Ecolodge.

Currently there is a proposed the Krahn-Bassa National Park coming up in Sinoe, Grand Gedeh and Rivercess Counties, and WCF will be working with stakeholders through the FDA to establish this park soon.

According to Prof. Boesch, his organization is willing to create more Ecolodges in Liberia to attract tourists to the forests. The cultural program during the opening ceremony was presented by a local cultural troop that was trained by Eddie Theater Production and will provide a cultural program to the tourists in the future.